Reproductive Justice New Brunswick (RJNB) sends our appreciation and solidarity to Julie LaLonde. Ms. LaLonde was harassed while trying to deliver a consent workshop to officer cadets at the Royal Military College (RMC), who not only denied the premise of consent in Canadian law, but cat-called, whistled at, and harassed her. RJNB believes that attempting to harass women with cat-calls and whistling is part of a culture which supports sexual violence. This violence is unacceptable from anyone, particularly students at an institution responsible to the Canadian public. We extend our support to any woman who has to work in this violent environment, including the women at RMC and Ms LaLonde.

We thank LaLonde, and all people, who work to create a world free of sexual, gendered violence. It is unacceptable that the Royal Military College (RMC) and the Department of National Defence (DND) would allow Rape Culture to be perpetuated. When faced the opportunity to address this problem, administration at RMC took months to offer an apology to LaLonde, and only after she received many months of harassing tweets and emails that, among other things, expressed disdain for her speaking about the harassment she experienced.
RJNB members know the bravery it takes to continue in activism in an environment that tries to silence people who speak against misogyny. It is deplorable that the RMC would try and perpetuate the culture of silence. RJNB calls on all institutions, including the DND and RMC, to support those in their communities which promote a culture of respect and empowerment, and to end the silence of sexual violence. It calls on men to stop harassing activists, including LaLonde, and to support them as leaders in a world with less violence against women.

RMC has now apologized after 5 months, for incidence that “could constitute harassment”. RMC has also graduated these officer cadets who were perpetrators to be leaders in the Canadian military. RJNB calls on the DND and RMC to enforce their extant policies of appropriate conduct for officers.

At the ProChoice Chain in Moncton 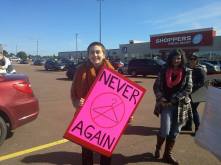 At the ProChoice Chain in Moncton 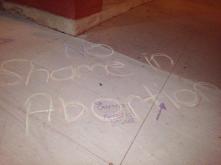